I ended up ordering a 45W model and two 60W models from Aliexpress, each of them for around $15. They were marketed as “100% genuine original”. Considering that a power adapter in a local Apple store costs $70-80 I was nearly certain that I’d get a fake instead. The below before/after images show you nicely that the seller has since dropped that claim.

I within 30s after I unpacked them that I was right with my expectations. The proof that the adapters are fake: 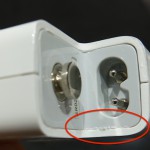 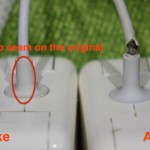 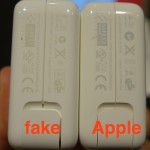 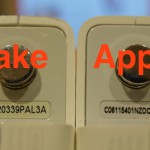 I know I could also have just ordered the MagSafe tip with the cord (w/o the power adapter) for less than $6. However, I didn’t feel like cracking open the existing adapters. Who knows what I might have broken in the process.

Conclusion? The most important thing is of course that they work well and haven’t blown up yet. I have no problem ordering a non-genuine replacement item if I’m told that it’s not genuine.

One thought on “MacBook power adapters from China”