In this post I’ll talk a little bit about Espressif’s new ESP8285, about a development board with that SoC and give you instructions how to run the NodeMCU firmware on it. It just so happens that only two days ago hackaday.com published a lurid article about the ESP8285. 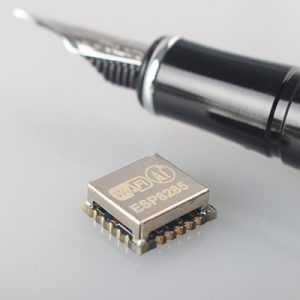 ESP8285 is the ESP8266 chip embedded with 1MB flash memory specially designed for wearable devices. It was announced by Espressif on March 9th 2016. I later realized that the announcement was made when the actually started mass production of the SoC.

I’ll give you a quick run-down of the specs just below, it really is very similar to the ESP8266. For more details check the ESP8285 datasheet.

ESP8285 integrates a memory controller and memory units including SRAM and ROM. There is no programmable ROM in the SoC, therefore, user programs must be stored in a SPI flash.

Ever since Espressif’s announcement in March I’ve been checking the usual outlets like AliExpress and Banggood for that chip. They still haven’t surfaced there but roughly two weeks ago I found an even better offer: a ESP8285 development board on Tindie.

Just as the SoC itself the board is tiny, 0.7 x 1 inch or 1.8 x 2.54 cm. And it’s a real beauty, isn’t it. I will definitely need to add it to my comparison of NodeMCU development boards.

I don’t know the purpose and possible states (solid, blinking, etc.) of all the LEDs yet.

This ESP8285 development board is produced by Kris Winer from Pesky Products. It’s currently the only one of its kind to my knowledge. Since it’s hand-made in small batches the price is pretty steep: $24.95 plus shipping. However, Kris states that

My hope is that this board will prove popular enough to have a small production run made, in which case the price could come down considerably.

I got a board from Kris with the intention to see if I could just run a standard NodeMCU firmware on it. He told me that he uses them with Arduino exclusively as he had struggled with NodeMCU in the past.

So, I plugged it in and immediately the blue LED started blinking like crazy and very brightly so. This made me suspicious and I wasn’t surprised when my initial flashing attempts failed. The flasher failed to establish a connection to the device. Then I remembered that before I started using NodeMCU dev kits or WeMOS D1 mini modules there was a time when the ESP8266 had to be put into flash mode manually. From then on it was all smooth sailin’.

How to flash NodeMCU to ESP8285

You need to pay attention to three things: put the device into flash mode, use SPI mode DOUT rather than DIO, define flash size 1MB i.e. 8Mbit. I use esptool to flash as suggested in the NodeMCU documentation.

This chapter intentionally left blank….seriously, from here on it’s just like using NodeMCU on the ESP8266. Opening serial communication with ESPlorer, connecting to WiFi access point, running other Lua code – absolutely no difference.