Since the awesome devsaurus recently fixed important SPI issues (#50 is from Christmas 2014!) in NodeMCU it’s now possible to run MAX7219 8×8 LED matrix displays with an ESP8266 and the NodeMCU firmware.

According to the pin layout for the NodeMCU dev kit v1 and v2 (see comparison) you need to connect the MAX7212 as follows:

In the second column I listed commonly found names on pin layouts and schemas. The values in the third column signify the actual pin numbers as printed on the NodeMCU development boards.

Writing and drawing on those 8×8 matrix displays took some getting used to for me. Interestingly the fact that you can rotate them whichever way you like made it more difficult rather than less difficult. There is a way to identify pin 1 but eventually it doesn’t really matter. However, you need to understand how “characters” are represented. 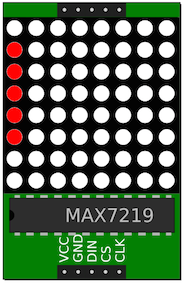 There is one byte per column of the 8×8 matrix i.e. 8 bytes. One byte signifies which of the 8 LEDs in a column should be turned on. 0x3E in binary form is 00111110 and every bit represents the state of one LED. So, the first LED and the last two will be OFF while the others will be ON. Again, the notion of “first” and “last” of course depends on the orientation of the matrix but as long as all characters are defined consistently it doesn’t matter. 0x3E on the matrix will look as shown on the left.

Moody is a simple program that declares 3 smileys and an array which contains all of them. It shows how to initialize NodeMCU SPI for the MAX7219 8×8 LED matrix and how to cycle through the smileys array and display one face after the other in a loop.

hosted with ❤ by GitHub